You can read this free sample of my first Sydney Rye Kindle World novella, The Wife Line, right here, or you can download it as a PDF to read at your own leisure. Your choice!

The Sydney Rye Kindle World, based on the bestselling novels by Emily Kimelman, launched on March 17, 2016. Nine authors added our own takes to the stories of the fearless Sydney Rye and her gigantic dog, Blue.

Just as Sydney thought she would go out of her mind with boredom, Nigel Willem finally did something different. One day, he left his office in mid-afternoon. Sydney and Blue ran from the Majors-Taurus office to Chelsea, arriving across the street from Willem’s house a few minutes before his limousine. She ran around a corner to take Blue out of sight, then bent down to retie her laces while she watched Willem step out of the Rolls-Royce. But today, he did not go into his house. He waited on the curb until the limo turned a corner.

Sydney idly scratched Blue’s head while watching around the corner. Before her neck got sore, one of London’s black cabs rolled to a stop in front of Willem. He got in and the cab was off again in seconds.

Sydney and Blue took off after them, easily keeping up in London’s traffic as the cab went toward the Thames.

As the black cab turned onto the Chelsea Embankment, she raised a hand and waved at another passing black cab. Fortunately, its yellow roof light was on and it skidded to a stop almost on top of her toes.

“Will that dog fit in me cab?” said the cabbie, his eyes wide as he leaned out the driver’s window.

“He’s my support dog. For my anxieties,” Sydney answered, opening the back door. Blue jumped in without hesitating, settling on the far side of the bench seat. For no reason Sydney could ever determine, Blue loved riding in London’s black cabs. She tossed her backpack onto the floor and slid in beside her dog. “Victoria Station, please. I’m late.”

“Takin’ a trip with just a knapsack for luggage?” the cabbie asked as he dodged a lorry.

“I’m supposed to pick up a mate,” she said, looking in vain for Willem’s cab ahead of them. Damn. How far could he have gotten? 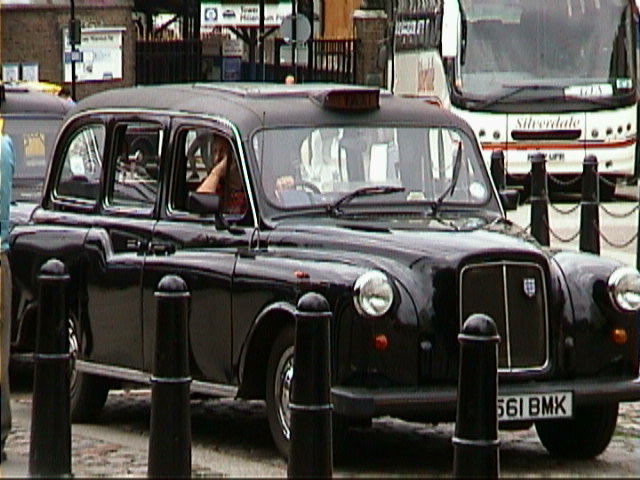 The cabbie, a balding, middle-aged man in a t-shirt, wove through the traffic along the embankment before turning onto the Royal Hospital Road. They passed another cab, but Sydney could not see Willem in it.

It took them less than 15 minutes to reach the permanent traffic jam around the mishmash of architectural eras that was Victoria Station. There was no way they could get closer before Sydney lost any chance of catching up with Willem.

“This will be fine,” she said, tossing a twenty-pound note at the cabbie as she flung the door open with the other hand. She jumped out, Blue right behind her, oblivious to the cabbie’s response.

Blue at her heels, Sydney dodged between the vehicles inching their way around the station, pulling her pack onto her back as she crossed the road. Getting through the crowds streaming in and out of the station was hard, but most people were eager to get out of Blue’s way.

Where is Willem? She scanned the square, and then spotted a balding, pale head on top of an expensive blue suit, stepping through the entrance to the train station. Pushing aside the question of how many balding, pale men in blue suits might be stepping into Victoria Station at any time, Sydney slowed to a walk and followed from a distance. Blue stayed by her hip.

Inside the station, she quickened her pace, staying some distance behind the balding man in the blue suit. Eventually, she could see part of his profile and sighed. It’s Willem, all right. I got lucky there. She promised herself not to trust to luck anymore.

Staying as far back from Willem as she could without losing him in the constantly moving crowd, she followed him across the station. He kept a relaxed but steady pace, moving confidently to the platform. Sydney followed him onto the Eurostar bound through the Chunnel for Paris. She watched him get into a car, then she boarded the one behind it.

A rail official in a blue uniform was at her seat within seconds. “Do you have a permit for that dog?” she asked.

“Yes. He’s my medically prescribed support dog for my anxieties,” Sydney said smoothly. She took a slip of paper from her backpack. The official looked at it, lips pursed tight. Finally, she gave the slip back to Sydney. “Ticket?” she asked.

“Gare du nord?” the official asked in a flawless Parisian accent. She took a large electronic device from a leather holder hanging on a shoulder strap.

“Yes, please.” I hope that’s where Willem is getting off.

“You realize you’re in a first-class seat,” the official said, her expression doubtful. “It’s the only way I travel,” Sydney replied, holding out her company credit card. She could almost hear the official thinking Americans. They’re all the same.

What’s The Wife Line about?

Human traffickers are selling young women from eastern Europe as sex slaves and killing them when they become inconvenient. Sydney Rye’s job is only to protect her client, until a mysterious, aggravating and irresistible young crusader pulls her and Blue on a far more dangerous path: taking down the whole slaving ring.

If you like Emily Kimelman’s Sydney Rye series featuring a strong female character, her canine best friend, Blue, tons of action and a dash of sex, you won’t be able to put The Wife Line down.